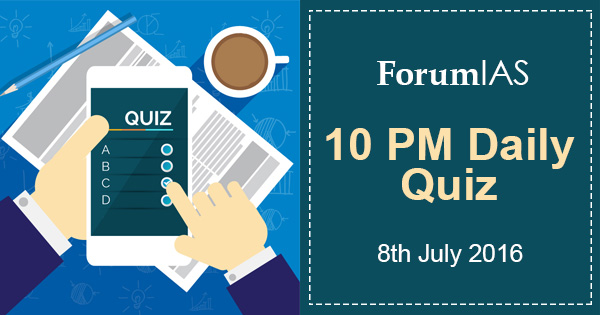 The purpose of these questions is to enable practice on a daily level for you to prepare Current Affairs for Civil Services Prelims Examination. This questions will be moderate level and it is expected of you solve these questions with decent overview of 9 PM Brief.

Please type your answers in the comments below .

Note : Answers to the quiz will be posted one day later.

Q.1) Atithidevo Bhava has been taken from which of the following Upanishads?
a) Chandogya
b) Aitareya
c) Taittiriya
d) Mundaka

Q.3) What is Ganga Vahini?
a) A boat which will carry out cleanliness work in the lower course of Ganga.
b) A mobile application which will cover the updates regarding Namami Gange
c) A distinct personality which will be the brand ambassador of the Namami Gange project
d) A national volunteer force

Select the correct answer using the codes given below: 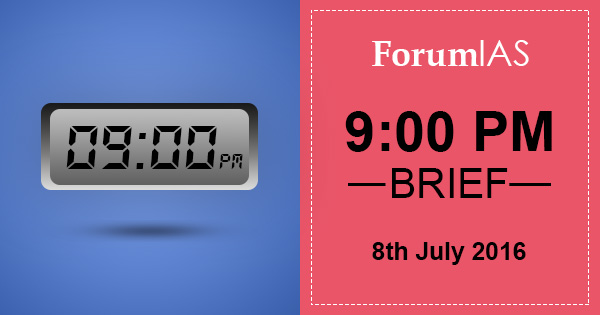 [1]Railways set to make revenue out of garbage

In order to generate revenue apart from fares, railways has been considering proposals to sell garbage produced across various stations in the country.

This move seems like a win-win for both the railways. For railways it would entail cleaner railway stations while also earning money by cleaning them. The waste so collected can also be used to generate energy and manure.

A scam has been unearthed by Directorate of Revenue Intelligence whereby Public Sector Banks have illegally remitted Rs . 2240 crores abroad. Fake documents and false declaration of traded goods was used to do this.

Foreign Exchange Management Act (FEMA) norms have also been violated. FEMA puts a limit on the amount that can be remitted abroad.

Another sector might see FDI liberalisation soon as the centre is planning to increase the FDI limit in newspaper and periodicals.

RBI board has pointed out at the conflict of interest which might arise out of the composition of Monetary Policy Committee(MPC) decided by the govt.

This is a very pertinent issue which has been raised by the RBI board. For MPC to function properly it must be free from such conflicts and biases.

[4]Divesting in RBI to recapitalize banks

In the present times, majority of the Public Sector Banks are wriggling under the burden of NPAs. There is an imminent need for the government to recapitalize these PSBs. For recapitalization, the govt needs money and such money can come from disinvesting  some of it’s stakes in RBI.

i) Increasing the govt. Revenues

iii) Divesting in some assets and using the money to recapitalise PSBs.

However, the Governor of RBI has advised against this. Let us see both the scenarios where RBI governor might be right and where economic survey might be right.

1. How disinvestment may not be a good move?

2. How disinvestment may be a good move?

Let us assume a similar situation as discussed in point 1 with a slight difference.

Avoiding disinvestment worth trillions in RBI and going for much practical disinvestment may actually work in generating finances for recapitalisation of PSBs. However, theories and analysis apart, the taste of the pudding is in the eating.

Several passenger centric norms mooted by the Government have been opposed by the airlines citing reasons such as lack of viability.

What norms are being opposed and Why?

While it may appear that airlines are opposing passenger centric norms for their own interests, it must be noted that many of their concerns are also genuine. The need of the hour is to weed out the problems by involvement of all the stakeholders and find a common ground. 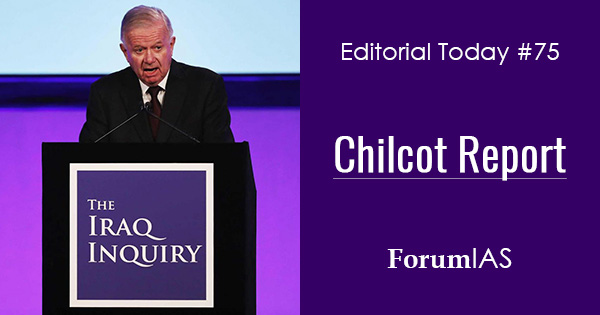 What is Chilcot Report It is the result of a seven-year inquiry into Britain’s role in the 2003 Iraq War.

Background The Chilcot inquiry launched in 2009 as British troops withdrew from Iraq.

What did the report actually find? It raises serious question on Tony Blair (PM of Britain at that time).

Counterargument of Tony Blair He argued that he had acted in good faith.

Effect of such war There is no disputing the ruthlessness of these dictators.

What is Chilcot Report

What did the report actually find?

Any lesson learnt from Iraq tragedy?

Effect of such war 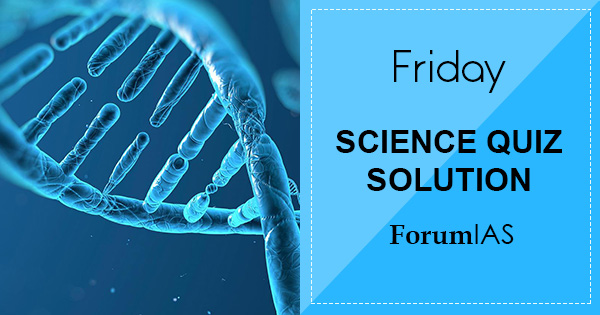 Explanation-Rosetta is a space probe built by the European Space Agency launched on 2 March 2004.

Explanation-ASTROSAT is India’s first dedicated multi wavelength space observatory. This scientific satellite mission endeavours for a more detailed understanding of our universe.  One of the unique features of ASTROSAT mission is that it enables the simultaneous multi-wavelength observations of various astronomical objects with a single satellite.

ASTROSAT will observe universe in the optical, Ultraviolet, low and high energy X-ray regions of the electromagnetic spectrum, whereas most other scientific satellites are capable of observing a narrow range of wavelength band. Multi-wavelength observations of ASTROSAT can be further extended with co-ordinated observations using other spacecraft and ground based observations. All major astronomy Institutions and some Universities in India will participate in these observations.

Q.3 LIGO, which was recently in news is used to study:

LIGO is a national facility for gravitational-wave research, providing opportunities for the broader scientific community to participate in detector development, observation, and data analysis. The capabilities of the LIGO detectors were greatly improved with the completion of the Advanced LIGO project in late 2014. The Advanced LIGO detectors will increase the sensitivity and observational range of LIGO by a factor of 10 over its predecessor, bringing 1000 times more galaxies into LIGO’s observational range.

Q.4 Meldonium is used to treat:

Explanation- Meldonium is used to treat ischaemia. Ischemia is the medical term for what happens when your heart muscle doesn’t get enough oxygen. Ischemia usually happens because of a shortage of blood and oxygen to the heart muscle. It is usually caused by a narrowing or blockage of one or more of the coronary arteries (which supply blood to the heart muscle)

Q.5 Which of the following plants is used to extract blue dye?

Explanation This is NCERT based question. Several species, especially Indigofera tinctoria and Indigofera suffruticosa, are used to produce the dye indigo.

Q.7 Recently, the which substance has been banned by Govt. of India which was used as an additive in breads and found to cause cancer? 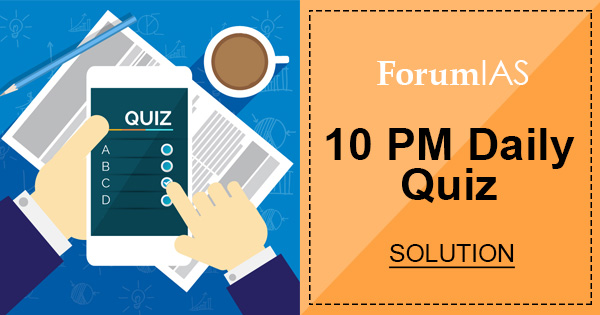 We posted 6 questions in 10 PM Daily Quiz on 7 July, 2016. Thanks for the amazing response. These questions will help you polish concepts based on current affairs. In case you have not attempted them, please attempt them by clicking below.

Q.1) The committee constituted by the government to examine the feasibility and desirability of having a new financial year is headed by

Q.2) Which of the following state has become the first state in the country to introduce minimum wages for part time workers?
a) Gujarat
b) Haryana
c) Rajasthan
d) Punjab

Q.3) Consider the following statements regarding Attorney General of India

(2) It shall be the duty of the Attorney-General to give advice to the Government of India upon such legal matters, and to perform such other duties of a legal character, as may from time to time be referred or assigned to him by the President, and to discharge the functions conferred on him by or under this Constitution or any other law for the time being in force.

(3) In the performance of his duties the Attorney-General shall have right of audience in all courts in the territory of India .

(4) The Attorney-General shall hold office during the pleasure of the President, and shall receive such remuneration as the President may determine.”

This article has permanently moved to a new location. 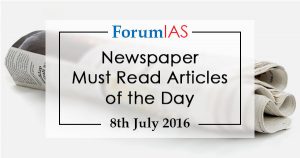 What we must learn from Africa {Foreign Policy – Paper II}

Why the Chilcot report is vital {International – Paper II} 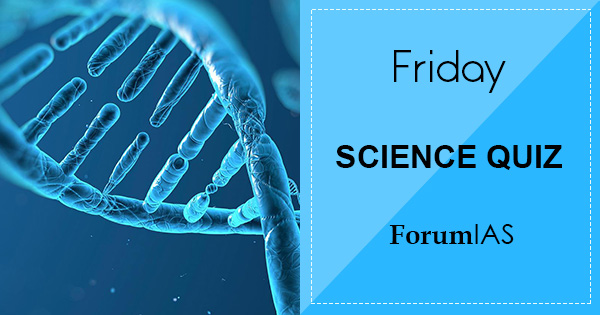 These are some questions on Science and Technology. Answer them to gauge your preparation for Prelims. Solutions will be posted at 5:00 pm.

Q.3 LIGO, which was recently in news is used to study:

Q.4 Meldonium is used to treat:

Q.5 Which of the following plants is used to extract blue dye?

Q.7 Recently, the which substance has been banned by Govt. of India which was used as an additive in breads and found to cause cancer?