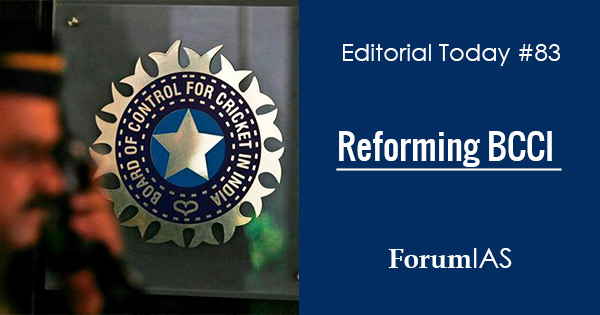 Recently Supreme Court has accepted most of the recommendations presented by Lodha Committee in its report for BCCI reforms.

Need for reforms and recommendations by Lodha Committee

Bihar, Chhattisgarh,Uttarakhand and six North-Eastern States (Sikkim, Manipur, Meghalaya, Nagaland, Arunachal Pradesh and Mizoram) are unrepresented on the Board.

Maharashtra and Gujarat have 3 Full Members, each representing parts of their respective States.

Except for Delhi, none of the other six Union Territories are Full Members of the BCCI.

Some members do not represent territories

Members like Services Sports Control Board, the Railways Sport Promotion Board and All India Universities do not represent any territory.

Some members neither play matches nor represent territories

Some of the members in this category are: National Cricket Club (NCC) at Kolkata and the Cricket Club of India (CCI) at Mumbai

Arbitrary addition and removal of associations

Despite being a Full Member, the Rajasthan Cricket Association has been treated as disenfranchised, resulting in the players of the State being forced to move elsewhere to compete.

Board president enjoys the veto power, from overall superintendence of the Board and its affairs to taking action against players and even approving the composition of the team chosen by the Selectors.

present Working Committee of the BCCI consisting of the various office bearers elected by the BCCI and other representatives of the Members do not have any managerial expertise and requisite experience to run BCCI in a professional manner.

There seems to be no rational basis for the Presidency to be rotated as per Zones, which has the effect of forsaking merit. A person who has the support of as few as two or three members in his Zone may end up as the President, if it is the turn of that Zone for election of President.

No representation to players

It is very rare that players are elected to the Working Committee of the BCCI.  they have no say in the affairs of the very body towards which they are the primary contributors.

Many individuals occupy various posts in the BCCI for multiple terms and on multiple occasions, without any ceiling limit.

There appears to be no ground on which an office bearer has to demit office.
Recommendations

Recommendations that SC has kept out of its purview:-

BCCI has been given six months to implement all the changes.