Historical background of Silk Road The Silk Road was a network of trade routes, formally established during the Han Dynasty. It reached its height during the Tang Dynasty.

Objective of reviving this route Economic and strategic

About one road one belt project It has two components

Implications for India Positive and Negative.

Recent Initiative China is digging deep into its cultural roots to anchor a seamless revival of the ancient Silk Road.

Objective of reviving this route

About one road one belt project

It has two components 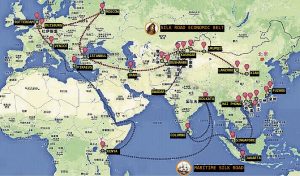 Funding for the project

One Belt, One Road’s vast scale has elevated it to high-profile status given China’s financial resources. But even China’s deep pockets have limits, with the country’s total debt to GDP at 250%. Three financial institutions have been set up to support its development, which have met some resistance in the West given they provide alternatives to the World Bank, IMF and ADB.

Launched in February 2014, the China-led US$40bn Silk Road Infrastructure Fund invests in One Belt, One Road infrastructure projects. The fund is capitalised mainly by China’s forex reserves and is intended to be managed like China’s sovereign wealth fund.

The NDB is a BRICS multilateral development bank established on 15 July 2014, by Brazil, Russia, India, China and South Africa. The bank was seeded with US$50bn initial capital, with the intention to increase capital to US$100bn. The bank will be headquartered in Shanghai. Each country will have one vote and no country will have veto power.

This initiative could shift the center of geo-economic power towards Eurasia instead of Asia-Pacific region which is dominated by US and its allies undermining their “Asia Pivot” strategy seen by Beijing as part of a China-containment policy.