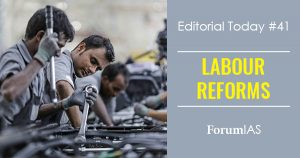 Importance of Industrial sector Extra workers from agriculture sector can mainly be absorbed in industry sectors.

Analysis 50 per cent of the population contributes only 17 per cent in GDP.

Complexity of labour Laws in India The Article 246 (with 7th schedule) of the Indian constitution puts the issues related to labour and labour welfare under the concurrent list.

Relation between labour reforms and industrial growth (Based on survey) Rigid labour laws lead to significant reduction in employment, productivity and growth.

Complexity of labour Laws in India

Relation between labour reforms and industrial growth (Based on survey)