To understand importance of health sector we have to first understand Human capital India is considered as a leading nation in the world in terms of human power.

What converts a population into a human capital?  Improving the health and nutritional status of the people.

Importance of health in human capital?If a population is not healthy it will not contribute to its full potential in the development of the country.

State of Health sector in India With respect to meeting its potential health outcomes and relative performance, the country has faltered.

Other Reason for slow improvement in health parameter Out of Pocket Expenditure.

Way Forward The nature, scope and incidence of these problems naturally vary widely across the country

What converts a population into a human capital?

Importance of health in human capital?

State of Health sector in India 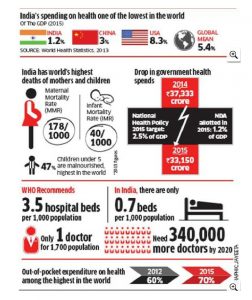 There are two reasons for this:-

Other Reason for slow improvement in health parameter

Out of Pocket expenditure