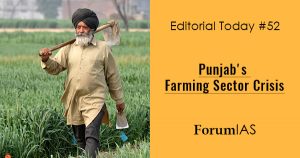 Background Punjab, whose geographical area is 1.53 per cent of India, contributed nearly 50 per cent in respect of wheat and rice to the Central Pool of food grains.

Why are high investments by Punjab farmers not bearing fruit? Bulk of private investment in Punjab’s agriculture is to extract groundwater for crops like rice.

How over-cultivation of rice is a chief culprit in the groundwater depletion crisis Traditionally, rice production has been led to the flooding of rice fields so that the crop grows in standing water throughout much of the growing season.

Environmental Problems associated with this The use of insecticides, pesticides, and herbicides and increasing level of methane gas due to pond-irrigation is polluting the state.

Brighter side of the report

Why are high investments by Punjab farmers not bearing fruit?

Main Reason for this problem

Environmental Problems associated with this