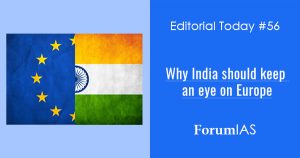 Issue It is about net neutrality debate.

What is net neutrality? Net neutrality is an idea derived from how telephone lines have worked since the beginning of the 20th century.

Background A pre-consultation paper on Net neutrality is now floating around.

What are over-the-top services? OTT or ‘over-the-top’ services are usually those delivered using the Internet.

Effect of successful net neutrality campaign in India? The response of Indian citizens to zero-rated has emerged as one of the talking, even rallying, points for a similar campaign in Germany.

Difference between consultation of India and Europe Unlike the Indian consultations which focussed only on zero-rated applications, the EU law is comprehensive.

Where India comes in The Indian campaign as well as the U.S. guidelines featured prominently as the “new hope for Europe”.

Global Impact EU remains a major trading partner for most regions, and an adverse Internet law could affect fair competition and establish monopolies.

What is net neutrality?

How did net neutrality shape the internet?

Net neutrality has shaped the internet in two fundamental ways.

What will happen if there is no net neutrality?

What are over-the-top services?

What is differential pricing for data services

Difference between consultation of India and Europe

Where India comes in