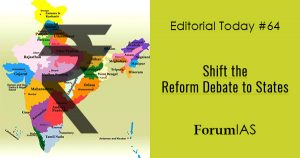 Issue Policies have to be implemented by state and thus the states also need reforms.

Present scenario of Indian states Though India is a single political entity it is yet to become single economic entity.

Measures taken by government to tackle this GST, Labour Reforms and Land Policies.

Correlation between regulation and productivity

Measures taken by government to tackle this