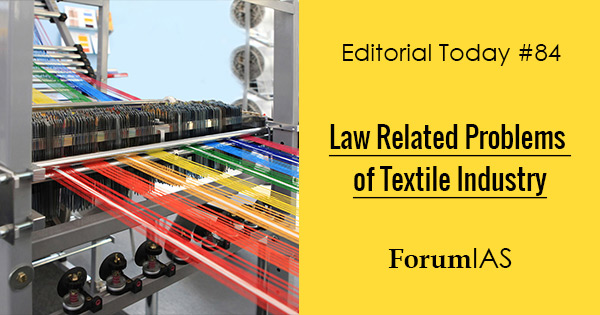 Textiles industry has been one of the most important industry in terms of employment and earning foreign exchange but presently it is facing many challenges and law related challenges are the root cause of many problems.

Most challenging act is IDA, 1947, which provides the job security to workers in organized manufacturing sector.

According to act, an organization employing 100 or more workers need to take permission from labor department before any layoff or retrenchment.

But labor department rarely provides such permissions even in the case firm has rendered unprofitable.

It’s worst affect is that industry may find it advantageous to either employ people on a contractual basis or shift to the unorganized segment.

Government has accepted a Rs.60 billion special package for this sector with an aim to:-

Tax and production incentives for job creation in garment manufacturing.

Government is also considering other specific interventions to encourage value addition so that India becomes an exporter of value-added (garment) products rather than just raw material (fibre and yarn).

Ministry of Textiles would also seek to lower excise duty on man-made fibre to 6 per cent from the existing 12 per cent.