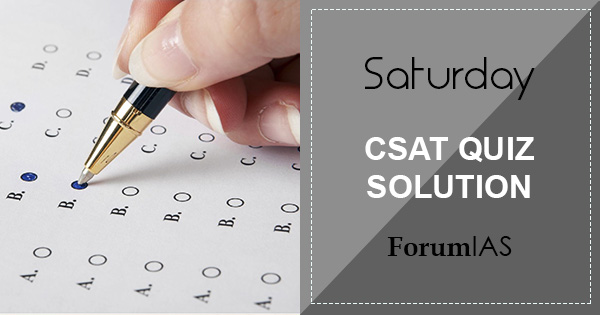 Q.1) A batsman in his 17th innings makes a score of 85, and thereby increases his average by 3. What is his average after 17 innings?

Q.2) One­-third of a certain journey is covered at the rate of 25 km/hr, one-­fourth at the rate of 30 km/hr and the rest at 50 km/her. Find the average speed for the whole journey.

Statement1: All woods are jungles. All movie stars are actors

Statement 2: No jungles is trees. No actor is singers

Statement 3: Some trees are flowers. Some singers are dancers

Which of the following logically follows from the above?

1. Some trees are woods. Some singers are movie stars

2. Some jungles are woods. Some actors are movie stars

3. Some flowers are jungles. Some dancers are actors

The male­ dominated corporate world needs more women on top. There’s no arguing there. But is the observable trend of “forced hiring” ­ to showcase women’s presence in company boards regardless of merit ­ the way to champion gender parity? It’s good if firms truly want greater women’s representation at senior management levels. But, as many women corporate leaders point out, such reward will remain ornamental, quota­- style, if firms just want to be faddish or politically correct. Blinking at meritocracy to push women up the corporate rungs for appearance’s sake accords decorative status, not real authority.

Some firms are said to set aside CVs from qualified male applicants to favour women. This is unfair: posts should be filled by suitable candidates irrespective of gender. It’s also an insult to educated and ambitious women who can compete on the basis of their competence. True, women are discriminated against in terms of recruitment, salaries and promotions. And they face the ubiquitous glass ceiling barring them from board­level positions. However, women becoming directors or CEOs as part of corporate PR exercises won’t root out gender bias in the workplace. It’ll merely help companies better conceal such bias.

No wonder many business representatives say gender diversity should flow from a merit ­based corporate strategy. Some suggest mid­level women executives be retrained for bigger remits. Others call for encouraging girls to join business schools, and greater social support for career women with families. The fact is, qualified women are mounting the corporate ladder in increasing numbers without their employers relinquishing gender ­neutrality. Indeed, the more transparently performance ­based industry is, the more deserving people can succeed. Women have already soared in areas from banking to biotech, hospitality to health, becoming role models for society. Talent needs a level playing field to shine. Spare women the tokenism that does them more harm than good.

Q.4) What does the author imply by “Blinking at meritocracy to push women up the corporate rungs for appearance’s sake accords decorative status, not real authority.”?

Explanation-According to the given statement, corporate hire women at higher levels not on the basis of their merit, but to be politically correct and to display gender diversity in their organization. Hiring women on this basis does not accord them the true power and authority that they deserve. This is aptly described by option (b).

Q.5) Why is the setting aside of CVs from qualified male applicants, an insult to educated and ambitious women?

1. It indicates women are incompetent and not able enough to make a mark of their own

2. It indicates women’s abilities are underestimated.

3. It indicates that gender disparity still exists in every phase of society

4. It indicates that women are merely treated as a showpiece rather than as smart, independent individuals

Choose the correct answer from the codes given below:

Explanation-CVs from qualified male applicants are set aside in order to favour women who are considered, by the male dominated society, in need of extra support in order to climb up the corporate rung. This indicates that, according to the corporate, women are incompetent and not able enough to make a mark of their own. Hence statement I and II holds true. Gender disparity implies not according equal status to women. If this statement were true, CVs from qualified male applicants would not have been set aside to favour women. It is nowhere stated or implied that women are treated as a showpiece

Q.6) Suggest a suitable title for the given passage:

a) No tokenism, please

b) Need to break the glass ceiling

Explanation- The primary purpose of the passage is to showcase how women are qualified and able enough to be hired and to take authority on the basis of their merits alone, and such corporate handouts are not required by them.

Q.7) Three friends, returning from a movie, stop to eat at a restaurant. After dinner, they paid their bills and were served mints on the table. Ram took 1/3rd of the mints, but returned four as he felt he had taken too much. Shyam then took 1/4th of what was left but returned three for similar reasons. Ravi then took half of the remainder but threw two back into the bowl. The bowl now had only 17 mints left. How many mints were originally in the bowl?