This portal ( http://forumias.com/portal ) is now deprecated and not updated any longer.

India became a full partner in the Thirty Meter Telescope (TMT) project. The project is the first implementation from the list of select outcomes from Modi’s US visit namely partnership in mega science projects.

Amongst existing and planned extremely large telescopes, the TMT will have by far the highest altitude, and will be the second-largest telescope after the E-ELT. The TMT is the only such telescope with government-level support from United States, China, Japan Canada and India.

Do you know which is the largest operational ground based telescope? It is the Gran Telescopio Canaris (GTC) , Spain.

What is the Thirty Meter Telescope (TMT) ?

The TMT is a near- infrared telescope. It has a  primary mirror with an effective diameter of 30 meters. You should know the wavelength in the spectrum. Look at the image.

You need to have a basic idea of the technology behind TMT. Read further to understand.

The primary mirror of the telescope will have an effective diameter of thirty mirrors and will be built out of hexagonal 492 segments, each of which will be 1.44 meters across. You must be wondering why a single 30 m diameter is not being created? The reason being, it will be too heavy and eventually sag under gravity. In fact, this is going to be the trickiest part. All these segments together have to behave like a giant monolithic mirror. This task is going to be handled by Indian Institute of Astrophysics, Bangalore.

The images  thus produced by the telescope will be very sharp, removing the effects of the Earth’s atmosphere by an advanced system known as adaptive optics. New term right? Adaptive optics refers to systems designed to sense atmospheric turbulence in real time, make the appropriate corrections to the beam and enable true image on the ground limited only by optical diffraction. In simple words, this capability will enable the TMT resolve objects much better, that is it will eliminate the blurring effect  caused due to the atmosphere.

The TMT will be the first telescope to incorporate these sophisticated features as integral parts. The TMT will have more than 10 times the light collection area of the current largest optical telescopes, and diffraction limited spatial resolution three times better than currently available.

Compared to the highly successful Hubble Space Telescope, the TMT will have 144 times the collecting area and ten times better spatial resolution at near-infrared wavelengths. An observing platform around the telescope will have a number of large instruments for obtaining astronomical data. 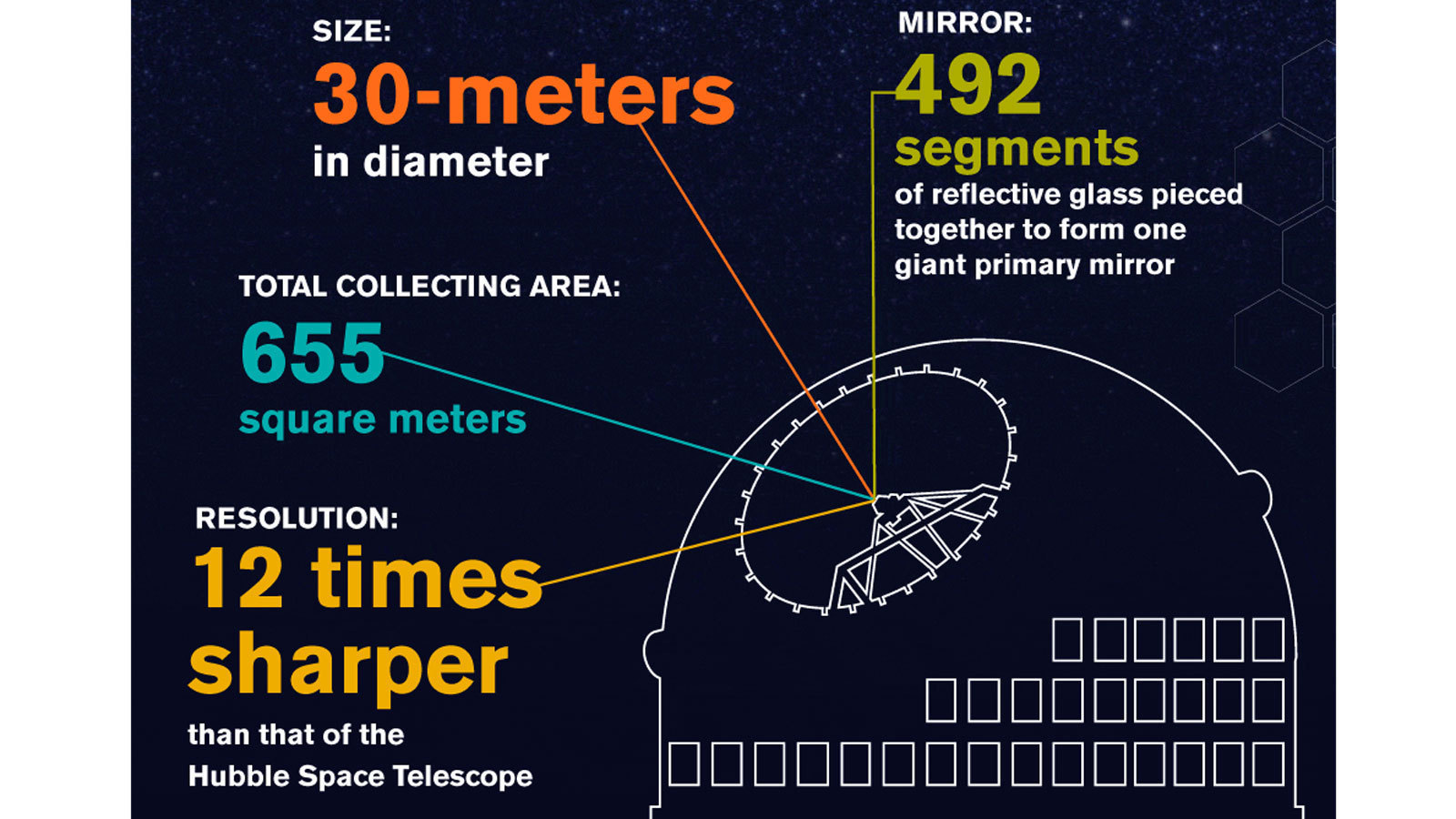 Where is it located?

The TMT will be located on Mauna Kea, an extinct volcano on the Big Island in Hawaii. The TMT observatory will be at an altitude of about 4000 meters above sea level on a site which already hosts a number of large optical telescopes including the two Keck telescopes. Natives have been protesting against construction here as they consider it as a sacred site and environmentally fragile.

This site has been chosen after careful study as ideally suited for
astronomical observations at optical and near-infrared wavelengths due to its excellent observing conditions.

Have you pondered why these telescopes are on mountain tops?This is so because water vapor in the atmosphere absorbs much of the infrared radiation from space , so the infrared observatories on Earth have to be located on high, dry mountains such as Mauna Kea in Hawaii.

Why is it being made?

It will enable astronomers to study the Universe with exceptional detail, right up to the first formation of stars and galaxies.

It will also give finer details of not-so-far-away objects such as undiscovered planets and other objects in the Solar System and planets around other stars.

Which all countries are a part of it?

The telescope will be built and operated by a consortium of institutions from the USA, Japan, China, India and Canada.

What is India’s contribution to it?

India will contribute about 10 percent of the cost of building the telescope and observatory, amounting to about Rs. 1300 Crore over the construction period 2014-23. The total cost of the telescope is expected to be about US $ 1.4 Billion. The Indian participation will be funded by the Government the Department of Science and Technology (DST) and the Department of Atomic Energy (DAE). The DST will be the coordinating department for the project.

The Indian effort is led by three institutes, namely the Indian Institute of Astrophysics (IIA) in Bengaluru, the Inter-University centre for Astronomy and Astrophysics in Pune and Aryabhatta Research Institute of Observational Sciences (ARIES) in Nainital. The India-TMT Coordination Centre will be located at IIA.

These will include setting up of a facility to polish about 100 mirror segments. India will gain the technology to manufacture fine aspherical mirror segments from the California Institute of Technology (Caltech). This technology will form the basis of the next generation of spy satellites.

Sophisticated components, like actuators which move the segments so that all the 492 segments act as a single monolithic mirror, edge sensors which sense relative displacement of segments due to gravity and temperature while tracking objects in the sky and segment support assembly for the active optics which helps in maintaining accurately the shape of the primary mirror will be manufactured by General Optics (Asia) in Puducherry, Avasarala Technologies and Godrej in Bengaluru respectively.

India will also contribute significantly to the complex software necessary for the operation of the telescope, including the telescope control systems and various components of the observatory software.

With this contribution in kind, India will acquire the capability to build other such large, sophisticated telescopes on its own and will be able to be the major contributor to international projects in the future. This partnership will also enhance India’s technological capabilities in all the high-technology areas involved.

Being a full time member, India has secured time for its scientists at the observatory, which is expected to become operational by 2020.
This will translate into 25 to 30 observing nights on the telescope for Indian scientists per year.

The TMT project will expand the role of Indian science community in international technology development and fundamental research.

Have a look at this short video  to know The thirty meter telescope and what it means for science more.

If you liked this article, click the kudos button !