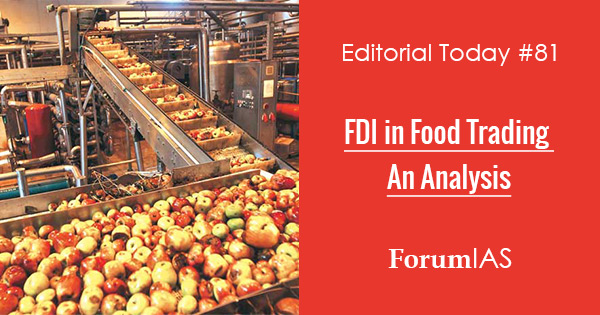 This change follows the reforms announced in the recent budget by central government to strengthen “Make in India” initiative.

1. Economic worth of food lost due to lack of good infrastructure is estimated to be around Rs 92,651 crore in the case of high-value perishable food, particularly, fruits and vegetables, milk, meat, fish, etc.

3. It can help build more competitive and inclusive value chains by investing in procurement, storage and distribution networks.

4. Current FDI policy has bypassed the much controversial FDI policy on multi brand retail trade and may have the similar positive impacts.

5. Announcement of allowing trade through e-commerce platforms is a welcome departure from the current policy stance where differential e-commerce in the B to C space is generally subject to greater restrictions in the retail space as compared to the brick and mortar operators.

6. In China, e-commerce is growing fast and food is a major part of the business — about 45 million people are regularly buying foods online.

Example of Non-vegetarians and lack of retail

Rise in the populations is mainly comprised of poultry-meat eaters, with an increase of about 68 per cent.  Monthly per capita consumption of chicken has grown by a staggering 224 per cent.

But the sale of poultry meat has remained confined to wet markets and open roadside slaughter houses.

Processed chicken meat accounts for not more than 5-10 per cent of the total poultry meat production in the country.

One recent volatile but successful example of permitting FDI has been, when 100 per cent FDI was allowed through the automatic route in food processing sector.

It further increased to almost $4 billion in FY14 before coming down drastically to about $500 million in FY16.

Two major roadblocks in the success of current FDI policy are:-

Essential Commodities Act prohibits stockholding large stocks certain listed items under the act by any one.  While both food processing industries and food retail chains need to hold large stocks for their operations.

If industries do not hold large stocks with them, rapid price fluctuations can throw them out of business in the long run.

APMC act puts restrictions in procuring directly from farmers in most states.

This hampers their efficiency and dissuades them from large investments, defeating the very purpose of the FDI policy.

Government should reform the APMC and ECA acts as soon as possible. Initiatives like National Agriculture Market (NAM) are a good beginning in dismantling the woes of APMC.

Government should try to direct foreign investment in ways that help compress the value chain by taking on board small players both at the back-end and front-end.

Best models are domestic cooperatives like AMUL and multinationals like Nestle , who have incorporated even small-holders into their model for procuring milk and local kirana stores for their distribution network.

For this there is need of non-restrictive environment for foreign firms to function and scale up their operations many fold.

Permitting FDI through the automatic route (rather than through approval) will be a much desired step.