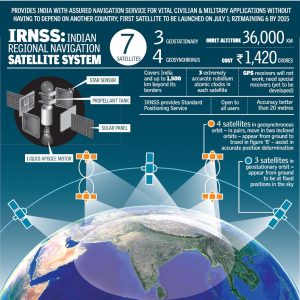 The IRNSS system is aimed at providing round-the-clock positioning data, with an accuracy of better than 20 m, over the Indian region and an area extending about 1,500 sq km around the country including SAARC countries.

The IRNSS will provide basically two types of services

How will it work

It will have a network of 21 ranging stations geographically distributed primarily across India. They provide data for the orbit determination of IRNSS satellites and monitoring of the navigation signals.

What is meant by Geosynchronous and Geostationary orbit?

A geosynchronous orbit (GSO) is an orbit around the Earth with an orbital period of one sidereal day, intentionally matching the Earth’s sidereal rotation period (approximately 23 hours 56 minutes and 4 seconds). The synchronization of rotation and orbital period means that, for an  observer on the surface of the Earth, an object in geosynchronous orbit  returns to exactly the same position in the sky after a period of one  sidereal day.

A geostationary orbit, geostationary Earth orbit or geosynchronous equatorial orbit (GEO) is a circular orbit 35,786 kilometres (22,236 mi) above the Earth’s equator and following the direction of the Earth’s rotation. An object in such an orbit has an orbital period equal to the Earth’s rotational period (one sidereal day), and thus appears motionless, at a fixed position in the sky, to ground observers. Thus the Geostationary orbit is the special case of a circular geosynchronous orbit above the equator.

We are now one of five countries with our own navigational system. The system will be similar to the Global Positioning System (GPS) operated by the United States with 24 satellites and the Glonass, Galileo and BeiDou systems of Russia, Europe and China respectively.

The Global Positioning System (GPS) is actually a constellation of 27 Earth-orbiting satellites (24 in operation and three extras in case one fails or 3 are acting as backup). GPS is a type of navigational system and broadly it comes under Satellite Navigation System. The U.S. military developed and implemented this satellite network as a military navigation system, but soon opened it up to everybody else.

In a military scenario, potential targets need to be constantly tracked before they are flagged as hostile and engaged by various  weapons systems and it is here that GPS systems assumes significance. By feeding the GPS derived data, weapons such as smart bombs, projectiles and even cruise missiles could be guided to hit targets with a high degree of precision.

The GPS in tandem with GIS (Geographic Information Service) allows military planners to pictorially view, plan, interpret and visualize data in ways that reveal solution and intelligence as never before.

Most of the combat aircraft now come equipped with GPS gadgets not only for guiding the flight of the aircraft under the cover of darkness, haze and cloud but also to use weapons and ammunition with vastly enhanced efficiency. Indeed, access to GPS capability is vital to stay ahead of the adversaries in the thick of the battlefield.

Thus no country can afford to depend on a foreign country’s constellations for navigation during war scenarios. IRNSS will make Indian Armed Forces self-reliant.

Some Application of IRNSS

India’s own navigational system will be called NAVIC (Navigation with Indian Constellation).

The name is dedicated to India’s mariners and fishermen who have been navigating using the sun and stars as waypoints for hundreds of years. They have shown strength and determination in venturing out to sea for so many years. Thus named this system for them, the ‘naviks’ (mariners).