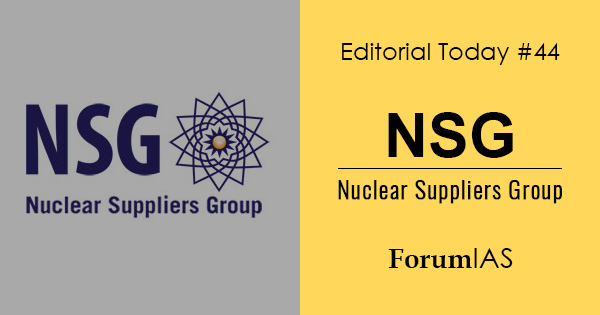 What is NSG? Nuclear Suppliers Group (NSG) is a multinational body concerned with reducing nuclear proliferation.

What is NPT? Non-Proliferation Treaty or NPT is an international treaty whose objective is to prevent the spread of nuclear weapons and weapons technology.

What is IAEA? International Atomic Energy Agency (IAEA) is an international organization that seeks to promote the peaceful use of nuclear energy.

Background The NSG group was set up in 1975 as a reaction to India’s 1974 nuclear test.

What is NSG WAIVER? It means exempting India from the NSG’s rules governing civilian nuclear trade.

Why NSG members agreed to grant waiver to India even though India is not a signatory of NPT? India’s commitments to non-proliferation, voluntary moratorium on further nuclear testing and no first use policy.

What did the NSG waiver mean for India? The waiver confers a de facto nuclear weapons power status to India.

Will India able to access all nuclear technology once it became member of NSG? MTCR, Australia Group and Wassenaar arrangement.

What is NSG WAIVER?

Why NSG members agreed to grant waiver to India even though India is not a signatory of NPT?

What did the NSG waiver mean for India?