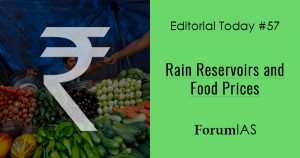 Issue It is generally believed that a good monsoon keeps food prices in control.

What is the advantage of using reservoir data? It serves as a sort of proxy measure of groundwater levels.

Findings of the study The data partly helps explain irregular years such as 2015 when monsoon rains were deficient.

Is there any significance of storage of reservoirs in particular month? It is found that reservoir levels in July are most significant.

What is the advantage of using reservoir data?

Thus daily data on the water stored in 90 of the country’s largest reservoirs were analysed to see if they were associated with food prices.

Findings of the study

Is there any significance of storage of reservoirs in particular month?

Impact of other factors on food inflation