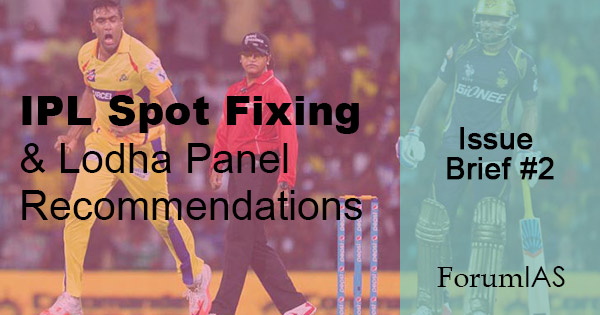 What is Lodha Panel?

A three man committee appointed by Supreme Court of India (by a 2 men-bench of Justice TS Thakur[now CJI] and Justice F.M.I. Kalifulla) in January 2015.

Why it was appointed?

SC came across BCCI’s discrepancies pertaining to its own rules and standard operating procedures in its course of hearing of 2013 IPL spot fixing case. It was made after Mukul Mudgal committee report was submitted. Committee members were:

What was its main task?

Before we go into that let us try to understand what is 2013 IPL spot fixing case?

Three cricketers were arrested in 2013 during IPL6. They were:

What is spot fixing?

Spot means a particular point. In terms of fixing, a particular point in game or spot means fixing a particular aspect of the game. Betting happens on an outcome of a certain event like on a particular ball in some over or how many runs would be scored in one ball or a next delivery will be wide or a no ball and likewise cases.

Hmm, so when does spot fixing came first into lime light?

This discussion is not on spot fixing. But for info, in 2010 Pakistan tour of England it first came into international limelight. Mohd Amir and Mohd Asif intentionally bowled no balls on specific delivery as a part of conspiracy of Captain Salman Butt to defraud bookkeepers. In 2012, during IPL season 5, it again came under prime time news shows when 5 players were caught again. And in 2013, 3 players as named earlier were caught by Delhi Police. They accepted 40-60 lacs rupees from bookies for giving pre-determined runs in an over. Mumbai police also arrested Vindhu Dara Singh and Gurunath Meiyappan for betting.

SC formed a committee headed by Justice Mukul Mudgal to probe into betting and spot fixing in IPL. Thereafter report was submitted to SC. It had 13 names in a list but they were never made public. They were given to apex court in a ‘sealed envelope”. Justice Mudgal committee was thus, just only an investigator.

SC appointed Lodha panel afterwards in 2015 and entrusted it with 3 tasks:

So what are its major recommendations?

Note: In the case of Zee Telefilms Ltd. vs Union of India, majority  of  Supreme Court’s five-judge Bench held that the BCCI was not an instrumentality of the state (hence doesn’t fall under ambit of article 12)  even though it exercised public duties or state functions.

SC had already said that report will be final and binding as far as punishment is concerned. However SC had said that recommendations relating with the BCCI reforms are not binding.

So what are its major recommendations regarding BCCI reforms?

What is proposed Apex council?

Top body at present is a 14 member BCCI working committee having president of board at top. Lodha Panel committee suggested this to replace with an Apex council. This Apex council will decide the road map for development of the game and monitor professional management(CEO+6managers) and ensure financial accountability. It will comprise of nine members –

The rest of the members will be called ‘Councillors’ and shall include those independent of the BCCI.

So above two can be summarized as:

This complete episode is perfect case study of how  lack of self-regulation can lead to an independent and autonomous sport organisation mismanage itself. Complete case reflects drastic governance system failure of the board. It shows how rules were twisted and reshaped to suit individuals. These above recommendations were arrived at by discussions with a lot of members of Indian cricket community and committee’s own observation. SC called it as a “straightforward, rational and understandable”. BCCI has some objections with respect to many of the recommendations. Some of them are discussed below:

It seems BCCI approach is two pronged, one, it is trying to follow ‘due process’ by studying report and second raising objections on important recommendations which are paramount in its restructuring. Lodha panel has tried to push aside the influence of persona on management and strengthen the institution. Opening to accountability will restore confidence of the public and set a role model for other sports too.