11 pandemics that changed the course of human history, from the Black Death to HIV/AIDS - to coronavirus - ForumIAS

11 pandemics that changed the course of human history, from the Black Death to HIV/AIDS - to coronavirus

11pandemics that changed the course of human history. 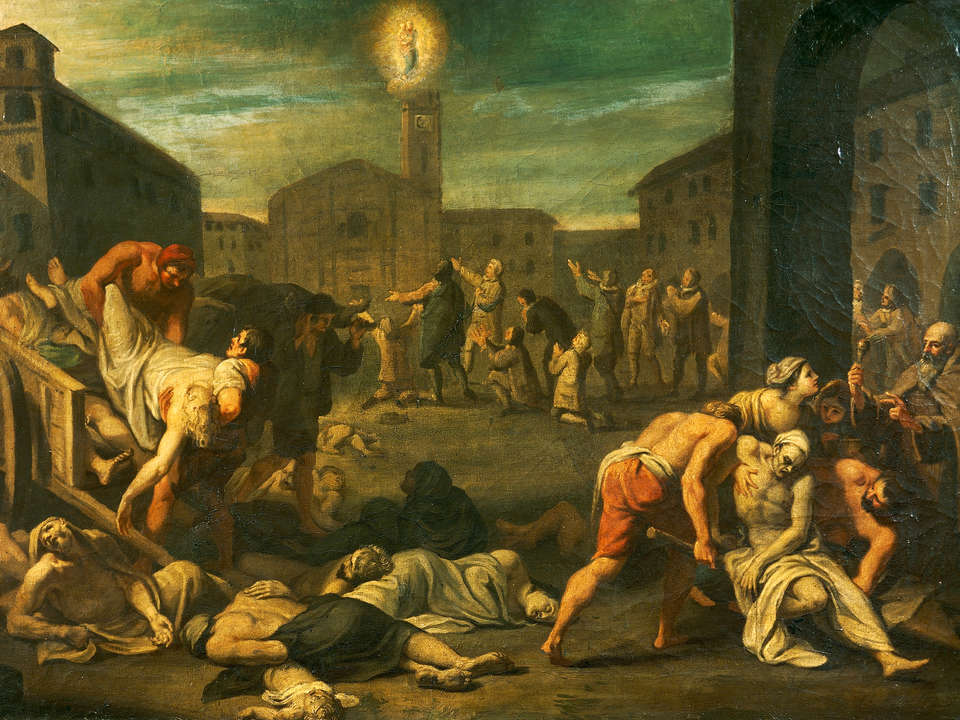 11 pandemics that changed the course of human history, from the Black Death to HIV/AIDS - to coronavirus

De Agostini/Getty ImagesDepiction from the 17th century of the plague in Italy, as seen in Rome's Museo Storico Nazionale Dell'Arte Sanitaria.Pandemics have

5,000 years ago, an epidemic wiped out a prehistoric village in China. The bodies of the dead were stuffed inside a house that was later burned down. No age group was spared, as the skeletons of juveniles, young adults and middle-age people were found inside the house. The archaeological site is now called "Hamin Mangha" and is one of the best-preserved prehistoric sites in northeastern China

Around 430 B.C., not long after a war between Athens and Sparta began, an epidemic ravaged the people of Athens and lasted for five years. Some estimates put the death toll as high as 100,000 people.

When soldiers returned to the Roman Empire from campaigning, they brought back more than the spoils of victory. The Antonine Plague, which may have been smallpox, laid waste to the army and may have killed over 5 million people in the Roman empire

Named after St. Cyprian, a bishop of Carthage (a city in Tunisia) who described the epidemic as signaling the end of the world, the Plague of Cyprian is estimated to have killed 5,000 people a day in Rome alone. In 2014, archaeologists in Luxor found what appears to be a mass burial site of plague victims.Their bodies were covered with a thick layer of lime (historically used as a disinfectant).Archaeologists found three kilns used to manufacture lime and the remains of plague victims burned in a giant bonfire.

The Byzantine Empire was ravaged by the bubonic plague, which marked the start of its decline. The plague reoccurred periodically afterward. Some estimates suggest that up to 10% of the world's population died.

Black Death traveled from Asia to Europe, leaving devastation in its wake. Some estimates suggest that it wiped out over half of Europe's population. It was caused by a strain of the bacterium Yersinia pestis that is likely extinct today and was spread by fleas on infected rodents. The bodies of victims were buried in mass graves

Economic impact of epidemics and pandemics

Loss of income through reductions in the size of the labour force and productivity. Example, a 2019 joint report from the World Health Organization (WHO) and the World Bank estimates the impact of such a pandemic upwards, bringing the total cost to 2.2 %-4.8 % of global GDP (US$3 trillion).

Vulnerable populations, particularly the poor, are likely to suffer disproportionately from an outbreak, as they may have less access to health care and lower savings to protect against financial catastrophe.

Agriculture Sector: Given that around 60 % of emerging infectious diseases reported globally are zoonoses (i.e. naturally transmitted diseases between people and vertebrate animals), virus outbreaks may result in significant costs to a country's agricultural sector and trade.

Tourism: Sharp Decline - A 2013 paper estimates the economic impact to the Mexican tourism sector of the H1N1 influenza pandemic, by examining tourist arrivals. Mexico lost almost one million overseas visitors, which is estimated to have resulted in losses of around US$2.8 billion. This extended over a five-month period, mostly because of the slow return of European travellers to the country. Many provincial governments decided to close many natural attractions (e.g. nature reserves) temporarily. With fewer tourists, and lower consumption, the retail, hospitality and entertainment sectors also suffer.