Why in News:
Recent visit of India’s Foreign Minister Sushma Swaraj to Iran.

3. Common challenge of Terrorism – India and Iran are facing challenges of extremism where Iran is continuously facing threats to Shia Mosques and Shia Muslims worldwide whereas India is continuously under threat of terrorist attacks.

Strategic:
1. Chabahar Port of Iran: India is developing Chabhar Port in Iran, which has manifold implications:
a) It would provide an alternative access to trade with Afghanistan bypassing Pakistan.
b) It will become gateway to central Asian countries. 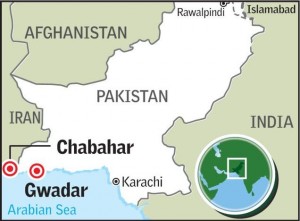 c) It would be countering Chinese presence at Gwadar Port in Pakistan. Chabahar port is located 72 km west of Gwadar Port.
d) It can lead to fulfilling India’s dream of becoming blue water navy by keeping Indian naval ships at Chabahar Port.

2. International North South Transport Corridor: India, Iran and Russia are the founding members of International North South Transport Corridor. This corridor will be a combination of routes involving Shipping, Railways and Roadways. E.g. India to Iran via Sea route, then it will be using Rail route to reach to central Asia and further it will be connected to Russia by Rail route or Roadways.

3. Iran-Pakistan-India Gas Pipeline: India has been vigorously trying to develop this gas pipeline to start direct supply of Natural gas from Iran.

2. Iran – P(5+1) Nuclear deal: Recent deal between Iran and P(5+1) countries resulted in relaxation on sanctions imposed on Iran, and it has opened way for India to improve its relations with Iran again, where India can increase its trade with Iran.

Economical:
1. Trade between India and Iran: Iran has world’s second largest reserve of natural gases but it is lagging behind in its export. Now, sanctions have been relaxed on Iran, so Iran is looking to engage again with India to improve its trade relations.

2. Infrastructural Development by India in Iran: India is developing huge infrastructure in Iran to develop better relationship between these countries. India is heavily investing in Iran on oil and gas fields.

2. Indian diaspora in Iran – Iran has huge population of Indian migrants as labour forces, and they serve as link for strengthened relationship between two countries.

Conclusion:
Recent visit of Foreign Minister Sushma Swaraj to Iran signifies Iran’s importance in India’s Foreign Policy where strengthened relationship between India and Iran will be win-win situation for both the countries.