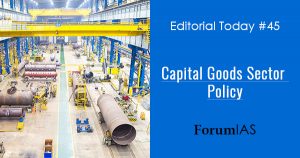 Characteristics of capital goods: They themselves don’t get transformed in the production process.

Background: The idea of a ‘National Capital Goods Policy’ was first presented  in the ‘Make in India’ workshop.

Vision of the policy: Increasing export, employment and Building India as the World class hub for Capital Goods.

Relation between Capital and Consumer goods

If these policy projections work out,  the size of the industry will become three times in about 10 years, which will take the growth rate of India to about 13%.