I am starting this thread for everyone to know about diverse features of Incredible India. It is said that India is diverse because historically different regions of India have been living completely isolated from one another, and evolved to become entirely unique.

Here we can contribute and let everyone know about our respective States.

And if possible, we can give headings like "State/Topic", for instance, if I want to talk about Art and Culture of Bihar, then I will give heading "Bihar/ Art & Culture". 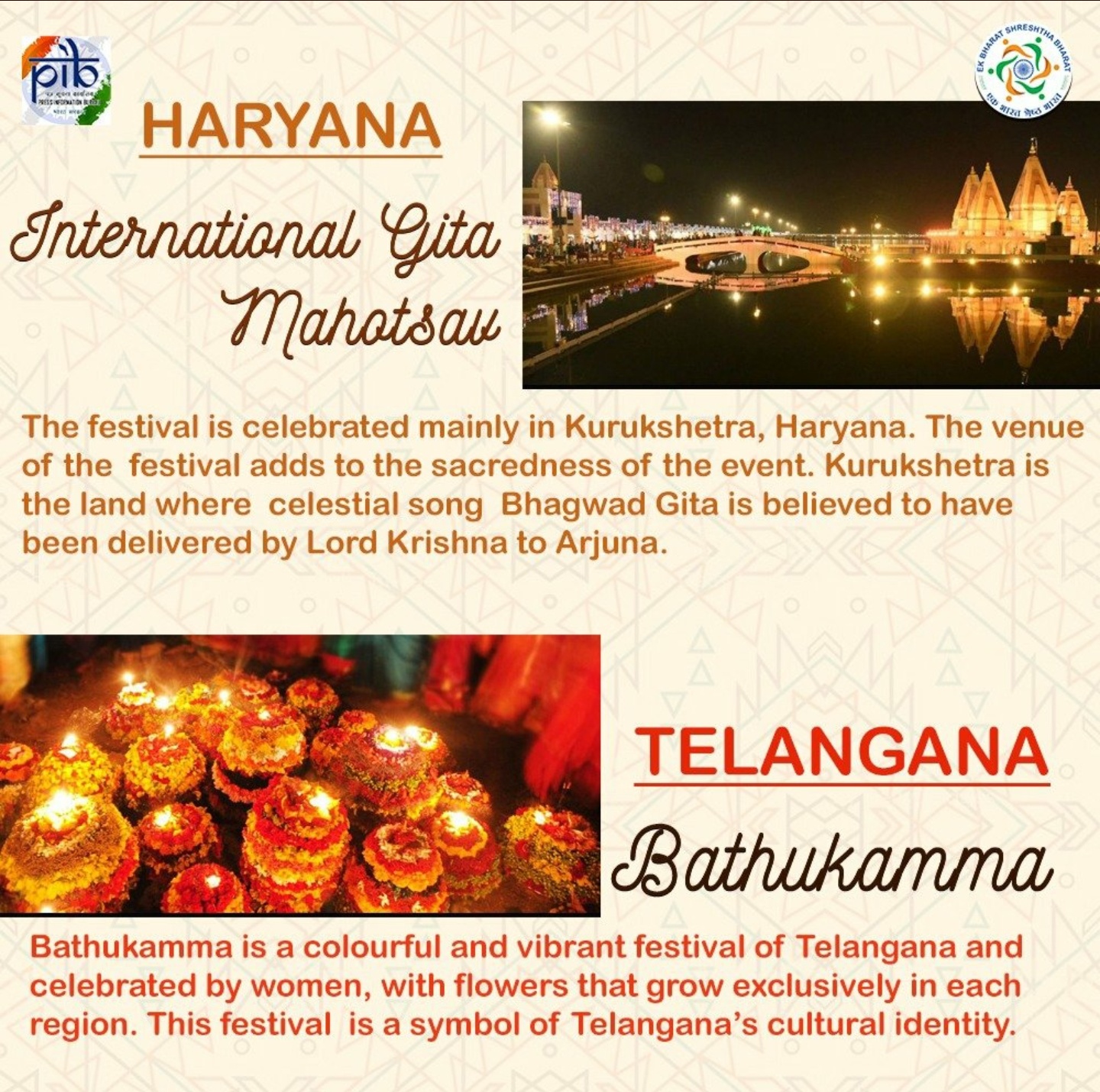 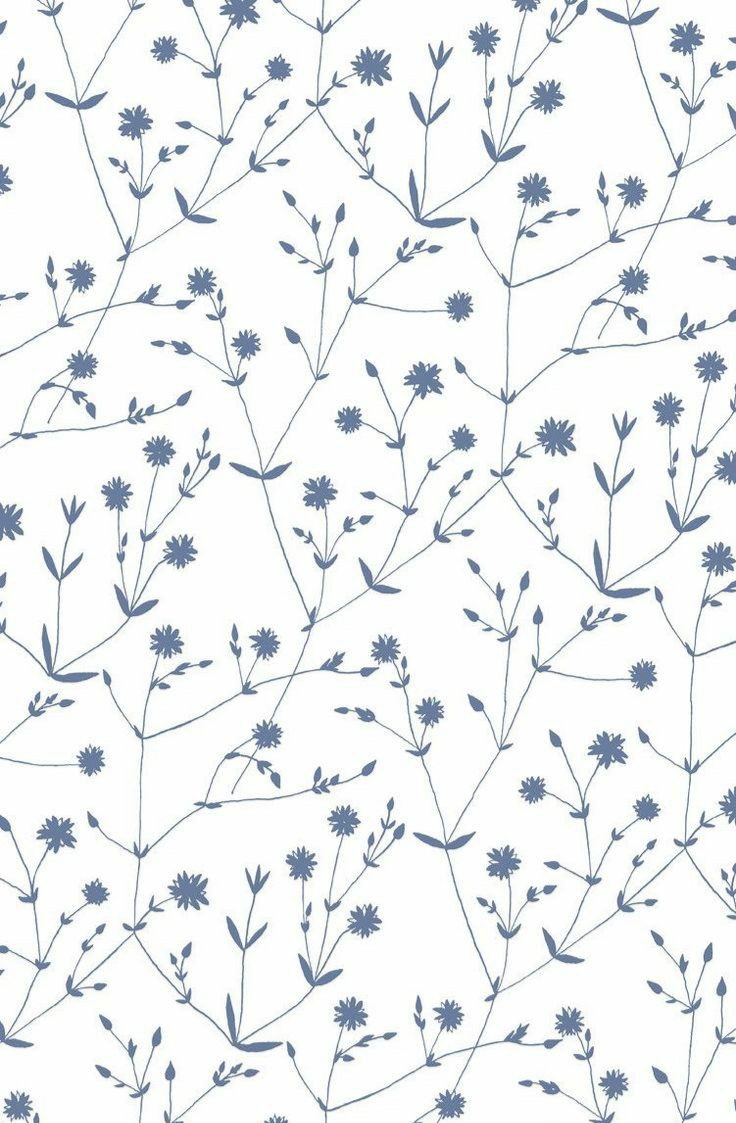 Chhura dance is very popular among the people and is in a way of an old experienced man teaching a young Shepherd the tricks of his trade. Both men and women participate in this dance.

Chapeli - It is a very famous and fast dance of Kumaun. The theme of the dance is love and it is very romantic. Both men and women participate in this dance and the costume is very colourful.

Jhodhadance is the most famous folk dance of Kumaon. People belonging to different caste or creed, perform this dance, irrespective of any discrimination, in almost all festivals.

Chanchi is also one of the famous folk dance of Kumaon. It takes place only in fairs. Mostly this dance is based on religious songs, something related to nature etc.

Cholia  is one of the famous folk dance of Kumaon which is as old as 1000 years. Swords are being used by dancers in this dance.

The development of the Garhwal school of painting as a branch of the Pahari school of art is believed to have started in the 17th century and reached its zenith in the latter half of the 18th and first half of the 19th centuries. The chief pioneer behind this growth was the eminent Garhwali painter, poet and historianMola Ram.

In the 17th century, the Mughal Prince Suleman Shikoh had taken refuge in Garhwal. He was accompanied by a few artists well versed in the Mughal style of miniature paintings. When he returned he left behind Shamdas and Haridas, who had already mastered the new painting techniques. These two were the ancestors of Mola Ram.

The Pahari Painting is inspired by the battles between good and evil. It has covered vast subjects like Indian life; its history, culture and traditions, with a touch of divinity. There is a lot of subtle spiritual content in the art, literature and mythology that has survived for generations in the Indian sub-continent. The Pahari Kalam style of painting was developed in the Kumaon area and was practiced in some of the Himalayan regions.

Aipan or Alpanais a popular Kumaoni art form done on walls, paper and pieces of cloth. This decorative art includes drawings of various geometric and other figures representing gods, goddesses and objects of nature. The pichhauras or dupattas are also decorated in this way. These ritual designs and patterns are an expression of a women’s artistic taste. 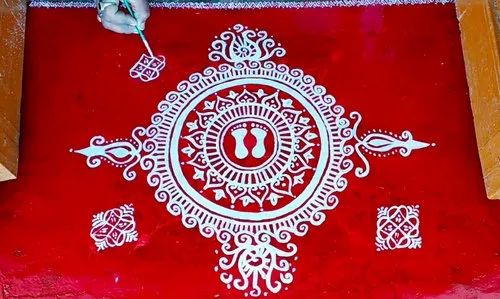 Barboond, Patta, Rangwalietc. are some more forms of local ritual paintings to be done on specific occasions.

Besides these some spots like Lakhudiyar, Falseema, Kasardevi in Kumaon and Dungri in garhwal have traces of ancient rock paintings and engravings.

Theyyam is aritual art formpopular in north Kerala in Malabar region. The performers of Theyyam generally performed in front of the village shrine with dancer along with the drummers

Onapottan is atraditional Kerala art formcelebrated duringOnam seasonspecially in North Malabar. A folk character with painted face and crown showcases every day during the festival.

Puli Kali is afolk artperformed during the annual harvest festival of onam to entertain peopleand to create awareness.Puli means Tigerand Puli Kali is the play of the tigers on the theme of tiger hunting, practiced in Thrissur district of Kerala.

Koodiyattam is atheater performed arta Masterpiece of the Oral and Intangible Heritage of Humanity, recognized by UNESCO. The Sanskrit drama of Kutiyattam presented in the traditional style in temple theaters of Kerala with musical instruments.

Kummatti Kali is the mostcolorful mask danceseen during Onam festival in Thrissur and Palakkad district of Kerala. The dancers cover their body with grass and the theme is mostly taken from thestories of Ramayana.

Chakyar Koothu is astory and performance art, traditionally been performed only by the Chakyar community.The traditional dance form is one of the oldest classical arts of Kerala and performed in the temples.

Kalaripayattu is abattlefield and combat art form, originated in Kerala and practiced in northern and central parts of the state. It isone of the oldest surviving fighting systemsin the world and famous for itsattacking and defensive patterns

Litti Chokha: This needs no introduction. The texture of Litti along with the crunchy crust makes it a foodie’s delight. It consists of wheat and sattu with spices, kneaded into round spicy balls, dipped in ghee. Chokha is prepared by mashing boiled vegetables (most common being potatoes, brinjal, tomatoes), adding spices and chopped onion, garlic etc and served with Litti as a complimentary delicacy. 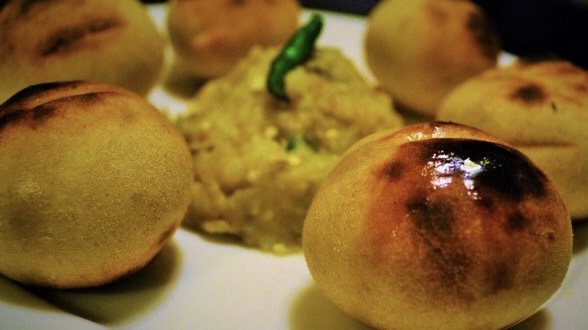 Chandrakala/ Pedakiya: It is very similar to Gujia. It is usually stuffed with sweetened khoya, coconut, cardamom powder and dry fruits in a crispy covering and dipped in sugar- syrup. 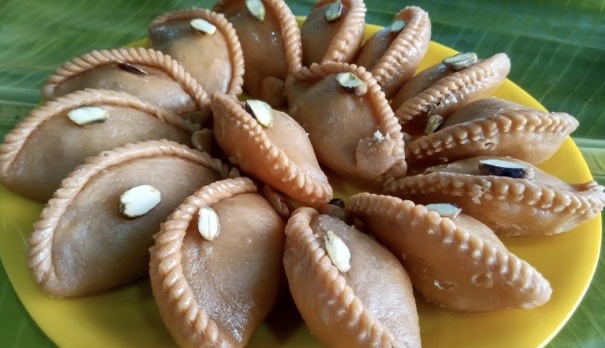 Khaja: It is believed to be of 2000 years old, very similar to the Baklava of Ottoman Empire. This unique dessert from Bihar is wafery in texture and yet melts in the mouth. Another variant is Belgrami, which is relatively less sweet and belongs from Udwantnagar, which falls between Arrah and Buxar. 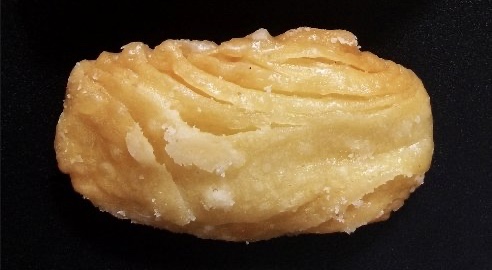 Laung - Latika: It is a traditional dessert of Bihar. The pungent taste of the clove along with sugar-syrup melts in the mouth. This is a perfect treat for cold winters. 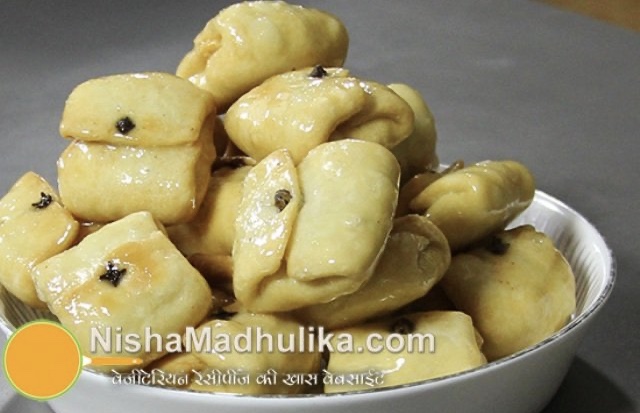 Dal Peetha: It is the Bihari way to make dumplings. This is covered with rice flour and stuffed with lentil paste, along with spices and pickle. Another variant is Dal-puri. 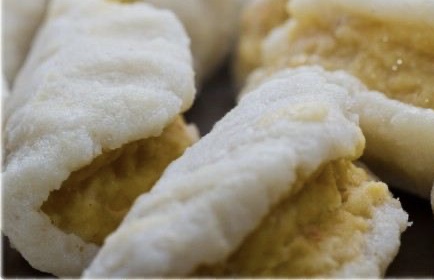 Thekua/ Khajuria: Most common snack of Bihar, made usually during Chhath Puja. This is made by deep frying the mixture of wheat flour and jaggery. If you have a Bihari friend, you must be knowing this. 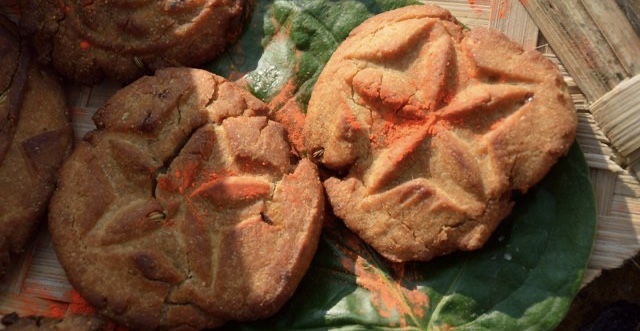 Malpua: It’s prepared by deep frying the batter which is a mixture of flour, milk, mashed bananas and sugar. These are also complimented with thick Rabdi.

Chirand: Near Chapra, Saran district. An archaeological site in Bihar with continuous records from Neolithic period to the reign of Pal dynasty in pre- medieval period.

I appeared at around 6th century AD. Chirand was far earlier than me! :P

The predominantlyBuddhist Sherdukpen community of Arunachal Pradeshis known for its honey-hunting skill.
Honey harvesting has traditionally been done twice a year..
The honey collected from the wild has been traditionally used for its medicinal properties.

There are five major types of silk of commercial importance, obtained from different species of silkworms. These areMulberry,Oak Tasar&Tropical Tasar,MugaandEri.

Except mulberry, other non-mulberry varieties of silks are wild silks, known asvanya silks.

India has the unique distinction of producing all these commercial varieties of silk.

South India is the leading silk producing area of the country and is also known for its famous silk weaving enclaves like Kancheepuram, Dharmavaram etc.

TheWanchotribe lives in the Patkai hills of the Longding district of Arunachal Pradesh.

Mr Losu has also got it enlisted in the US-based Unicode Consortium for online use.

Muga Silk / golden silk -is one of the major contributor to the state's  income in Assam.

Sualkuchi villagein Assam - almost every household in this village is associated with silk weaving.

Longwa Village  in Nagaland- TheIndo Myanmar border  passes through this village. The border passes through the village chief's house, dividing it into two halves, one that falls in India and the other in Myanmar.

NeerMahal  in Tripura -Only Floating palace  in the North eastern region.

1.Sohrai Khovar paintingis a traditional and ritualistic mural art being practised by local tribal women in the area of Hazaribagh district ofJharkhand. 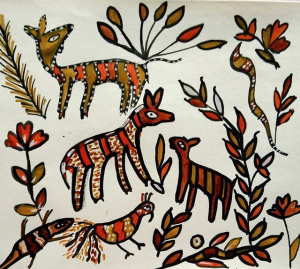 2. Chak-Hao, the scented glutinous rice which has been in cultivation inManipurover centuries. 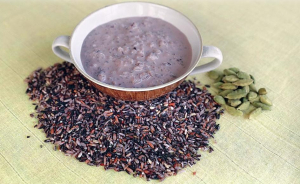 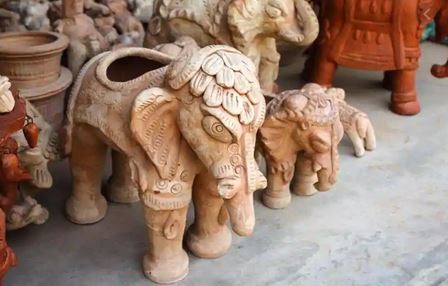 4.Kovilpatti kadalai mittai  is a candy made of peanuts held together with glistening syrup, and topped with wisps of grated coconut dyed pink, green and yellow. It is manufactured in Kovilpatti and adjacent towns and villages in Thoothukudi district inTamil Nadu 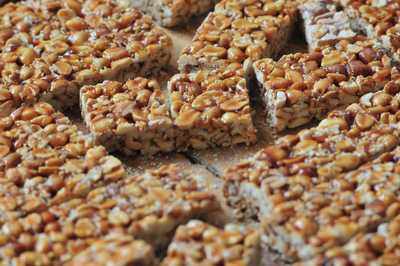 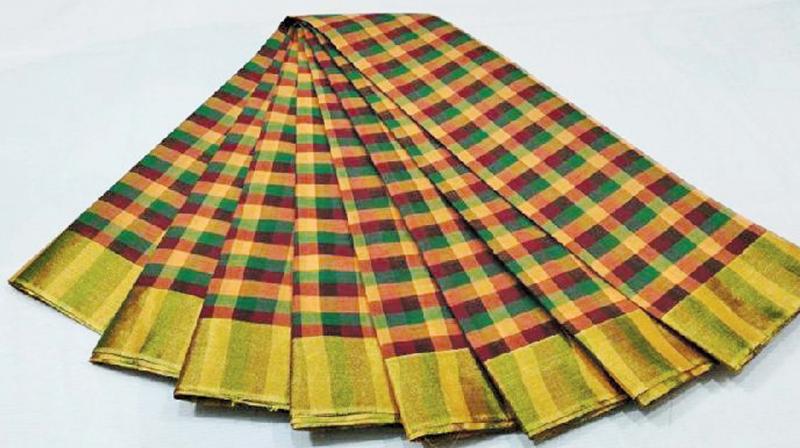 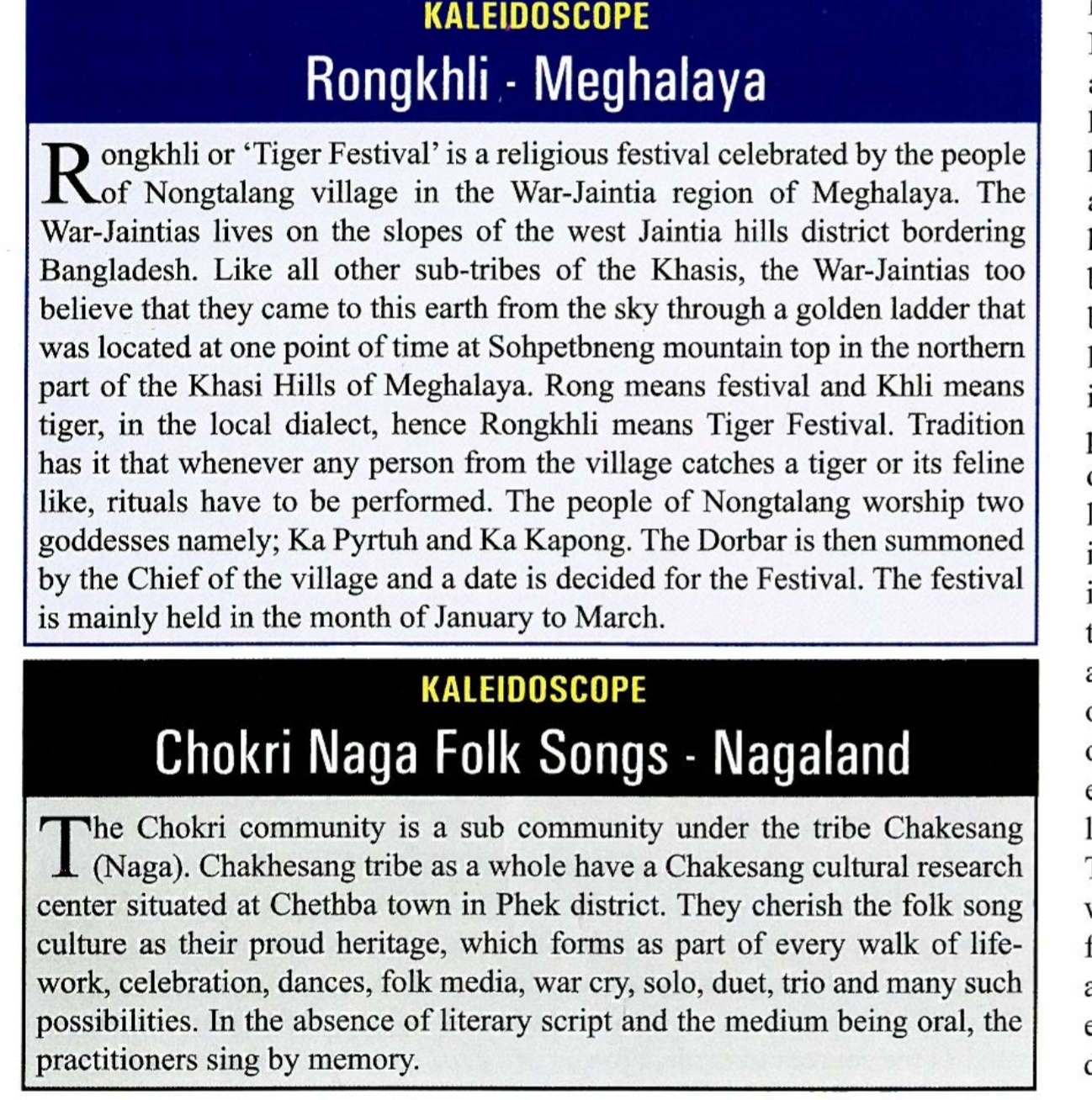 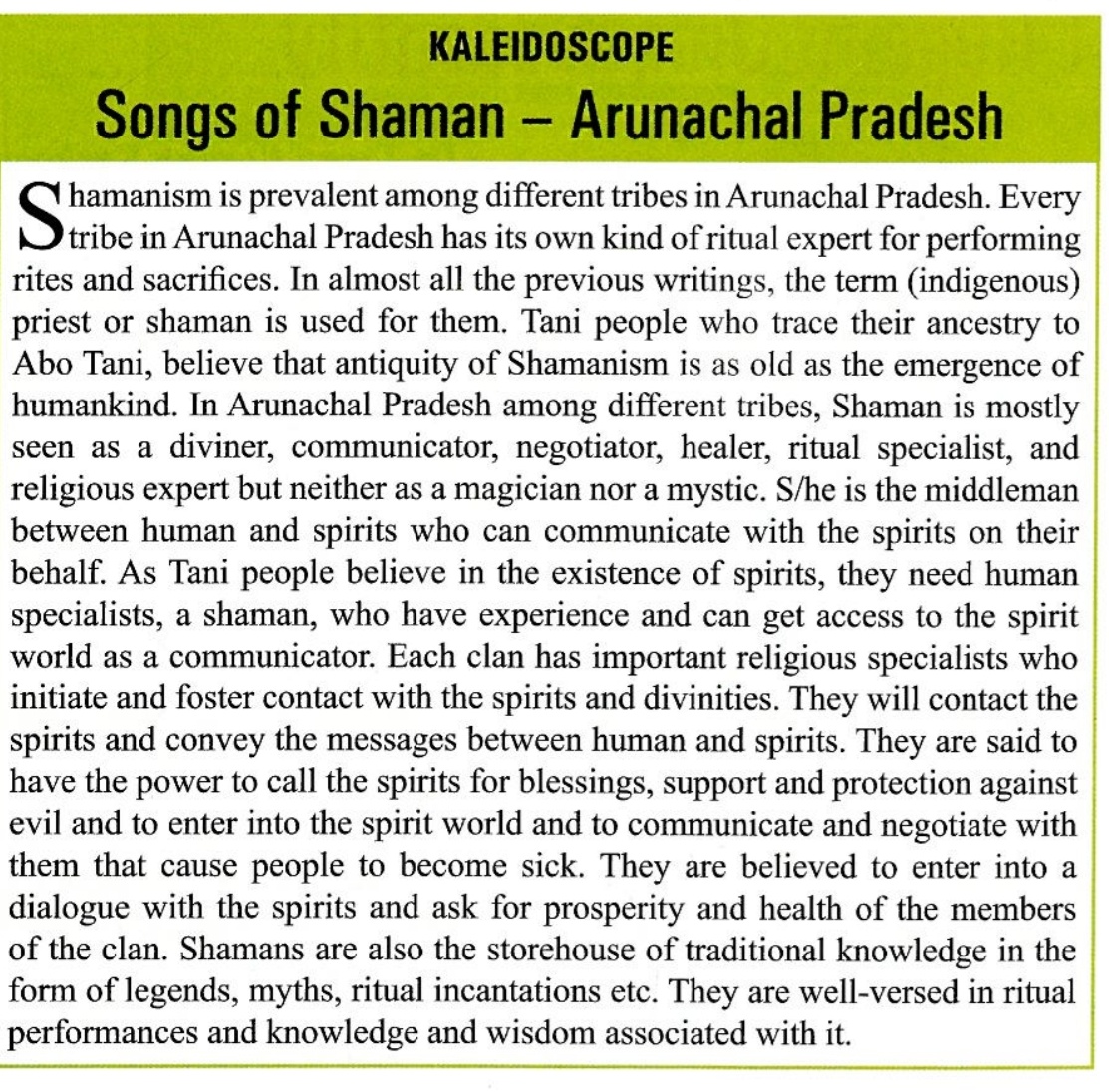